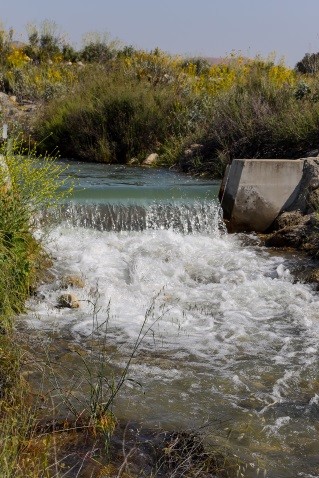 Heavy rainfall, the collective use of imported water for storage, and improvements in flow capture have filled basins with enough groundwater to serve 180,000 families for one year.

Like money in the bank, local groundwater aquifers have seen record-breaking deposits this year with a staggering 20 billion gallons saved so far and another two months still left in the water year, the San Bernardino Valley Water Conservation District announced today.

More than 61,000 acre-feet of snowmelt and rainfall has been diverted from Mill Creek and the Santa Ana River by the District and recharged into the groundwater basin for future use by those who pump water from the basin. Imported water was also used to help supplement the amount of water stored.

The water stored so far this year is enough to serve 180,000 families in Southern California for an entire year, Cozad said. It helps to replenish the water used during the prior drought periods and will help provide resiliency for future dry times.

“Our region is blessed with large underground aquifers that can store substantial amounts of water for use in times of severe drought,” Cozad said. “Thanks to our partner agencies on the Groundwater Council, we have been able to capture the rain that fell in the winter and spring and saw unprecedented collaboration to store as much water as our facilities can handle.”

The last time the region stored this much groundwater was in 1987, coming down from a period of successive wet winters. Prior to that, 20 billion gallons of storage had not been achieved since the late 1940s.

“We are excited and encouraged to see the large amount of storage achieved in such a short amount of time,” said San Bernardino Valley Municipal Water District General Manager Douglas D. Headrick, whose agency imports the State Project Water used to supplement recharge. Valley District is one of more than a dozen members of the Groundwater Council.

The Groundwater Council is a 21st century model for cooperation, where member agencies pitch in their fair share for the purchase of imported water to achieve optimum levels of water storage in the San Bernardino and Bunker Hill groundwater basins.

This year’s record-breaking water storage comes on the heels of two other years of significant recharge.

The 2017-18 water year, which runs annually from Oct. 1 through Sept. 30, reflected the highest streamflow recharge levels in five years at 16 billion gallons — the 16th highest recharge amount since the District started recording measurements 106 years ago.

Since 1912, the SBVWCD has conserved more than one million acre feet or 326 billion gallons of water by diverting the natural flow of the Santa Ana River and Mill Creek into 71 percolation basins that allow the water to collect and seep naturally into the ground, where it can be pumped out for future use.