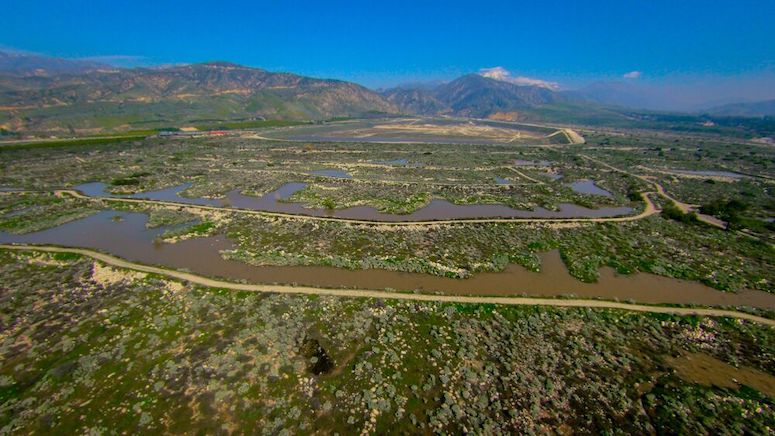 Recharge totals reflect the amount of snowmelt, rainfall, and imported water captured by the District into holding ponds, and percolated naturally through silt and sand into the groundwater basin for future use.

SBVWCD General Manager Daniel Cozad attributes the success of this water year to a very wet winter and the establishment in 2018 of a group of local cities and water agencies, known as the Groundwater Council, contributing their fair share of imported State Project water for local storage.

The water stored so far this year is enough to serve 210,000 families for an entire year, Cozad said, but it is being saved to help make up for significant overdrafts in the past.

“Our region is blessed with large underground aquifers that can store significant amounts of water for use in times of severe drought,” Cozad said. “Thanks to our partner agencies on the Groundwater Council, we have been hit by a double-windfall of heavy precipitation and unprecedented collaboration to store as much water as we can.”

The San Bernardino Valley Groundwater Council is a 21st century model for cooperation, where member agencies pitch in their fair share of water for recharge or contribute money for the purchase of imported water to achieve optimum levels of water storage in the San Bernardino and Bunker Hill groundwater basins.

The last time the region stored this much groundwater was in 1987, coming down from a period of successive wet winters. Prior to that spell, 22.8 million gallons of storage wasn’t achieved since the late 1940s.

This year’s record-breaking water storage comes on the heels of two other years of significant recharge.

Since 1912, the SBVWCD has conserved more than one million acre feet or 326 billion gallons of water by diverting the natural flow of the Santa Ana River and Mill Creek into 71 percolation basins that allow the water to collect and seep naturally into the ground, where it can be pumped out for future use.