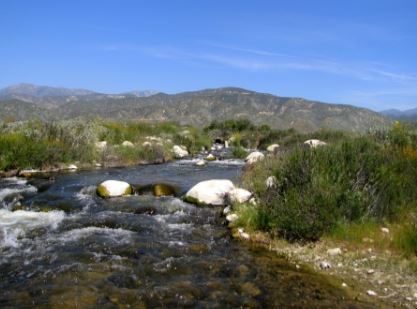 The plan accounts for water, mining, flood control and local species needs, and is the result of two decades of consensus building among area cities, water districts, and regulatory agencies

In what is considered the final step in a lengthy process, the USFWS posted a Record of Decision for the Upper Santa Ana River Wash Plan and its Habitat Conservation Plan.

It took 20 years of negotiation and collaboration among water, mining, flood control, government and environmental interests – plus a bipartisan-supported act of Congress and a signature from the U.S. President – but today’s action officially clears the way for the plan’s full implementation.

“This plan is really all about establishing the right land for the right uses,” explained SBVWCD General Manager Daniel Cozad. “It could not have been done without the hard work of everyone who came to the table, and we are extremely grateful for the thought and dedication put in by so many to make this happen.”

In preparation for today’s posting, the SBVWCD Board of Directors last week unanimously adopted the Habitat Conservation Plan and certified the federal and state environmental processes and analyses necessary for the plan to move forward.

Board President Richard Corneille celebrated these final milestones with a nod to the community.

“It is rare for a group of seemingly opposing views to commit to such a long process of collaboration,” he said. “I think this accomplishment reflects our region’s unique spirit of pulling together and doing what’s right for the greater good.”

"I commend all of the partners for the vision, collaboration and commitment to reach the finish line on this incredibly important conservation planning effort," said Paul Souza, Regional Director for the U.S. Fish and Wildlife Service. "The Wash Plan is unique for its complexity and scope, in successfully balancing conservation of species and their habitats with improving water security for local communities, expanding aggregate mining, and offering enhanced recreation opportunities."

The 4,800-acre Wash Plan began as a vision in the early 1990s and was developed by a local task force established in 2000 with the cities of Highland and Redlands; the SBVWCD, East Valley Water District, and San Bernardino Valley Municipal Water District; CEMEX, Robertson’s Ready Mix; the U.S. Fish and Wildlife Service, Bureau of Land Management, California Department of Fish and Game, Inland Valley Development Agency and the Endangered Habitats League as members.

The final land-use strategy included an exchange of property between the U.S. Bureau of Land Management and the San Bernardino Valley Water Conservation District. Federal land policy required a vote of Congress and ratification by the President to make that happen.

U.S. Representatives Colonel Paul Cook (R-Apple Valley) and Pete Aguilar (D-Redlands) introduced the bipartisan Santa Ana River Wash Plan Land Exchange Act, and it was consolidated into a larger Land and Natural Resources bill that included more than 100 other pieces of legislation signed into law in 2019.

Rep. Cook called the Wash Plan passage a win for the economy and a win for the environment. “This plan identifies already disturbed land in the Wash for aggregate mining, while expanding on habitat conservation areas for our native, threatened, and endangered species,” he said.

Cozad said the plan represented collaboration at its best. “The Wash Plan not only reflects consensus among diverse interests within the community, it led to a bipartisan bill that was widely supported by both parties,” he said. “A lot of work went into getting the details right on this project, and everyone who was involved in the process deserves credit for that.”

For more than a century, the SBVWCD has stewarded the San Bernardino Valley water basin and the native species of the Upper Santa Ana River Wash. Its collaborative approach to project management assures high-quality local water supplies for people, agriculture, and the environment. This includes groundwater recharge and oversight, and protection of habitat and native species in the Wash. Visit www.sbvwcd.org.