Our History and Mission

Water has always been a precious commodity in the San Bernardino Valley. In normal conditions, the valley would be considered a desert. However, because of groundwater and irrigation, agriculture can flourish.

In 1910, the Water Conservation Association (WCA) was organized to conserve the water of the Santa Ana River by storing it in the groundwater basin for future use. In 1931, local citizens voted to create the San Bernardino Valley Water Conservation District as a public agency to protect against the excessive export of the local surface water by downstream agencies. The WCA was dissolved in the early 1940s, and all land and water property were transferred to the District.

The Water Conservation Act of 1931 provided broad authority to exercise a variety of powers necessary to further the District's primary goal of conserving water such as making contracts, acquiring property through eminent domain, owning and operating recreational facilities, owning and operating hydroelectric plants, and intervening in the actions of other agencies when those actions interfere with the natural flow of streams that would otherwise be conserved for beneficial use.  The District is organized under Division 21 of the California Water Code and regulated by Sections 74000 to 76501.

The District has historically operated water recharge facilities in two areas: the Santa Ana River and Mill Creek. Depending on the amount of rain and snow in the mountains, the District recharges the groundwater basin during most months of the year. Imported water has also been recharged in the District's facilities.

During the 2017 Community Strategic Plan the Board made slight modifications to the District Mission statement, shown below:

The San Bernardino Valley Water Conservation District ensures recharge of the Bunker Hill Groundwater Basin in an environmentally and economically responsible way, using its facilities as well as all sources of high-quality surface water, including imported and recycled water. We strive to improve the sustainable supply and quality of groundwater while protecting and enhancing our land resources as we balance ecosystem responsibilities with public access and aggregate resources uses.

The water mission is but one of the District's important efforts undertaken by the District.  The sections below present more recent history for the District.

In 2009, the nearly 100-year-old district retained the right to remain serving the people of the valley when the Local Agency Formation Committee (LAFCO) did not recommend combining it with the San Bernardino Valley Municipal Water District (Valley District).  During the three-hour long public meeting, District representatives and supporters convinced the LAFCO Board of Directors that the goals and mission of the Water Conservation District were not only different from those of the Municipal Water District but well worth keeping separate. They were also able to demonstrate that combining the two districts could result in a net loss of revenue and not save tax-payer money or improve efficiency.

The LAFCO decision has proven to be a wise one. The Conservation District is participating with Valley District in the improvement plans of the Conservation District’s Santa Ana River water collection and spreading grounds based on recommendations of the Optimization Study. These improvements will benefit the entire basin by trapping and spreading larger storm flows rather than letting valuable surface water flow downstream and out of our area. Another joint project is the improvements to the Cuttle Weir that will improve flow to the basins up to nearly 200 acre-feet per day of water to our basin’s groundwater spreading supply.

In 2011, the District was able to recharge more water than in the last 20 years.  Approximately 55,000 acre-feet were recharged.  This was possible because of the operating agreements and renewed relationships with water agencies in the basin, above average precipitation, and a basin that could hold the water recharged.  The District cleaned the basins in advance of the flows and was ready to get this valuable water into the ground for storage. The water recharge is the third highest in the 100-year history of the District.  However, despite the historic cuts to the budget, the cost of basin cleaning and maintenance required rate increases to avoid seriously depleting reserves. Despite unanimous support for the increases, 2010 and 2011 were deficit years financially for the District. 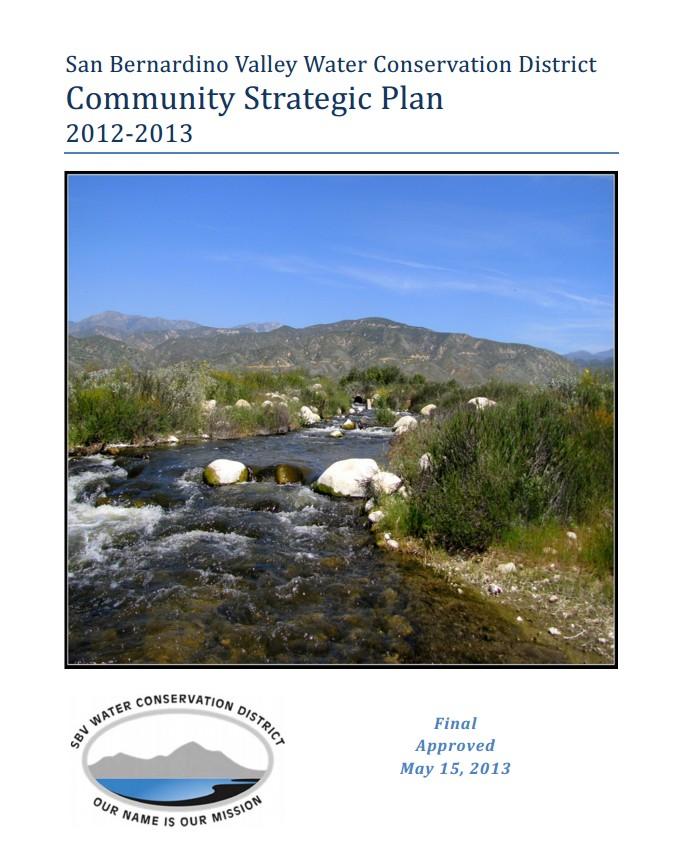 The District had a great need and the opportunity to stabilize its revenue with producer supported rate increases to fully fund its Groundwater Recharge operations as well as changes in mining agreements to stabilize the Land Resources Enterprise.

While these increases were large as a percentage, they did not increase the cost per acre-foot by much.  The reductions in District costs and the groundwater charge fully paying the cost of basin recharge allows the District to stabilize and begin to rebuild reserves with one-time revenue and new contract funding.  The District completed a Community Strategic Plan (CSP) by reviewing the 2010 strategic plan and then engaging the communities, as well as water and other partners to review and refine ideas for the strategic plan to fit the services needed. Partner and community suggestions were incorporated and combined with updated planning by the Board of Directors to produce the Approved District Community Strategic Plan.

LAFCO again reviewed the District in 2015 as part of the municipal service review to reinstate the District’s sphere of influence.  LAFCO’s report noted that the District has significantly improved its financial ability to provide recharge and related conservation services and that it cooperates with partners and communities for shared services and access to facilities.  LAFCO accepted the proposed Groundwater Council as an alternative to consolidation as it more equitably allocated the groundwater charge to all agencies benefiting from the Bunker Hill Basin. On October 21, 2015, the LAFCO Commission provided the District a sphere of influence which covers the Bunker Hill groundwater basin, shown above. Also, the District has continued to strengthen relationships and open lines of communications with water agencies, cities and its partners in the region.

Following the CSP approval, the District addressed several governance issues and developed an enterprise financial system to separate the District’s activities into distinct enterprises, providing transparency and accountability in the District’s business dealings.  The District also implemented a concise reserve policy to give clarity to the development, maintenance and use of reserves. In 2012, the District completed the Enhanced Recharge Agreement with Western Municipal Water District (WMWD) and SBVMWD and subsequently, SBVMWD also joined the Wash Plan to permit these facilities.  This agreement is a cost-effective method for additional recharge within the Basin for all three districts.  Construction of these facilities began in August 2017.

The District also implemented SB-235 in 2012.  This bill, sponsored by the District, allows it to reduce from seven to five the number of members serving on its Board. The Board subsequently adopted five new Division boundaries, based on the 2010 Census.

In the past years, the District has made significant progress in many areas.

The list below includes significant accomplishments related to goals in the 2013 CSP: 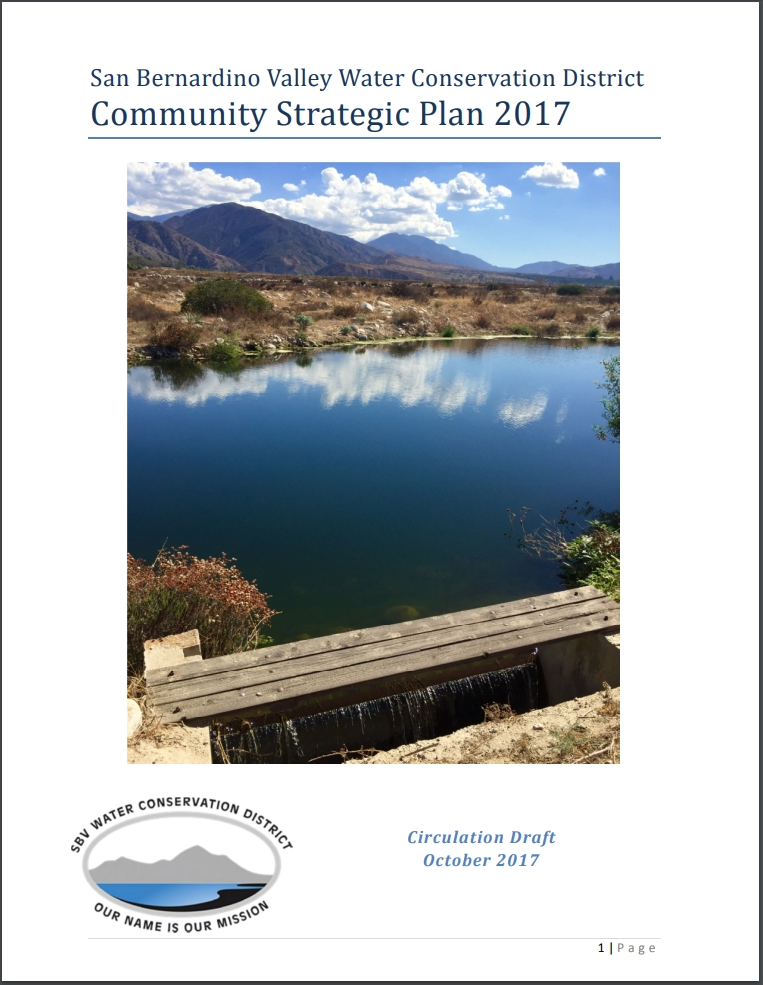 In early 2017 the Board held a series of workshops and reviewed the performance and accomplishments under the 2013 CSP.  They also identified issues and opportunities they wanted to discuss and incorporate into and updated CSP.

Throughout the spring and summer, the Board discussed each issue and reviewed the updated plan prepared by staff.  In October, they approved a circulation draft CSP for community and partner feedback. After feedback was received and incorporated the final Community Strategic Plan was approved on December 13, 2017.