Doing the right thing for water storage, native species and industry took an act of Congress, with House and Senate voting to adopt a bill that allows these land uses to coexist in the Santa Ana River Wash in mutually beneficial ways, the San Bernardino Valley Water Conservation District announced today.

The Santa Ana River Wash Land Exchange Act allows for the ongoing expansion of sensitive habitat areas and water conservation, while establishing appropriate areas for mining operations that provide $36 million in payroll annually to the region.

Expected to be signed into law by President Trump, Senate Bill 47 clears the way for the Bureau of Land Management to exchange land with the San Bernardino Valley Water Conservation District under regulations in the Federal Land Policy and Management Act.

The 4,500-acre Wash Plan was developed over many years by a local Wash Plan Task Force made up of the cities of Highland and Redlands; the SBVWCD, East Valley Water District, and San Bernardino Valley Municipal Water District; CEMEX, Robertson’s Ready Mix; the U.S. Fish and Wildlife Service, California Department of Fish and Game, Inland Valley Development Agency and the Endangered Habitats League.

“This legislation is an important step in helping local efforts that are good for the environment, good for the local water supply, and good for business and jobs in our region,” said Daniel Cozad, general manager of the San Bernardino Valley Water Conservation District.

Cozad called its passage collaboration at its best.

“It shows that it is possible for both sides of the aisle and both houses to work together to help the communities they serve,” he said. “We really appreciate the work of everyone involved in bringing this legislation to life.”

Rep. Cook called the Wash Plan a win for the economy and a win for the environment. “This will align local land ownership with appropriate uses, setting aside already disturbed land for aggregate mining and setting aside important habitat for conservation purposes,” he said.

“The Wash Plan will empower industries to take root and flourish, continue investments in our transportation and infrastructure, and preserve our environment and regional wildlife. This is an important step forward for our communities,” he said.

Cozad said the land exchange will lead to more protection efforts for habitat, improved connectivity in the wildlife corridor, expanded water recharge and storage capacity, and the future establishment of public access and trails which, once built, would connect and help complete the Santa Ana River Trail.

“This project has been 15 years in the making,” Cozad said. “Doing a Habitat Conservation Plan with this many seemingly conflicting interests is unusual, particularly when you consider each has a different mission to implement.”

A Win-Win for Homeless, Endangered Species 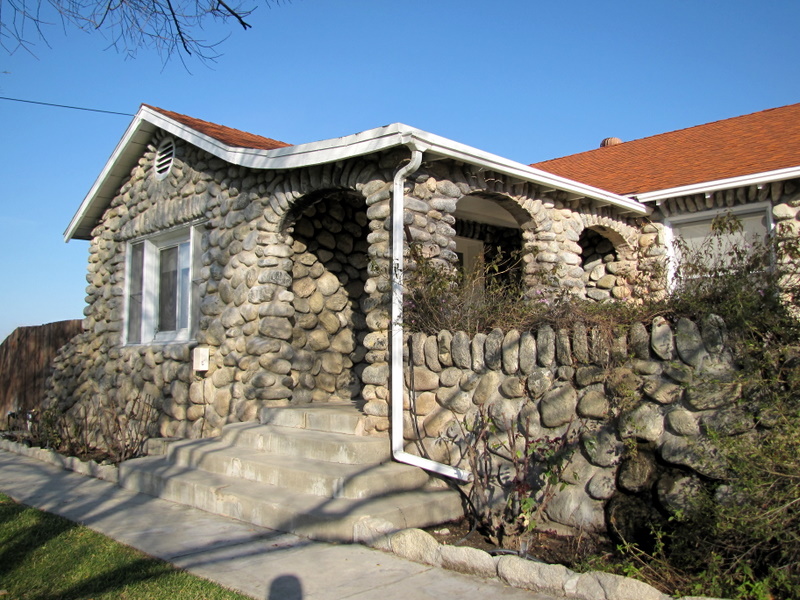 The San Bernardino Valley Water Conservation District has entered into an agreement with Steps 4 Life to provide transitional housing in this Mentone home in exchange for establishing a homeless policy for the district and training for its employees.

Homelessness in the Upper Santa Ana Wash area and at district headquarters increasingly impedes the ability of SBVWCD employees to do their job and to protect endangered species.

So, this year, the district took a new approach to dealing with area homelessness and created a partnership with the Redlands-based nonprofit Steps 4 Life Community Services to provide them with housing. In exchange, the nonprofit will help the district establish a homeless policy and employee training program.

Steps 4 Life has a successful track record of providing transitional supportive housing in the Redlands area. Its goal is to make a difference in improviing the self-sufficiency of its clients, and to reduce the recidivism that homelessness often presents to veterans, suvivors of domestic violence, individuals in recovery, single parents and individuals with mental health issues.

The four-bedroom house provided through the agreement is located next to the district's field office. Residents there will be able to take advantage of opportunities to work in the wash as part of their transitional programming. That means if the district needs to hire someone to do something, it will have a pool of skilled workers right next door. That makes it a win-win for everyone. 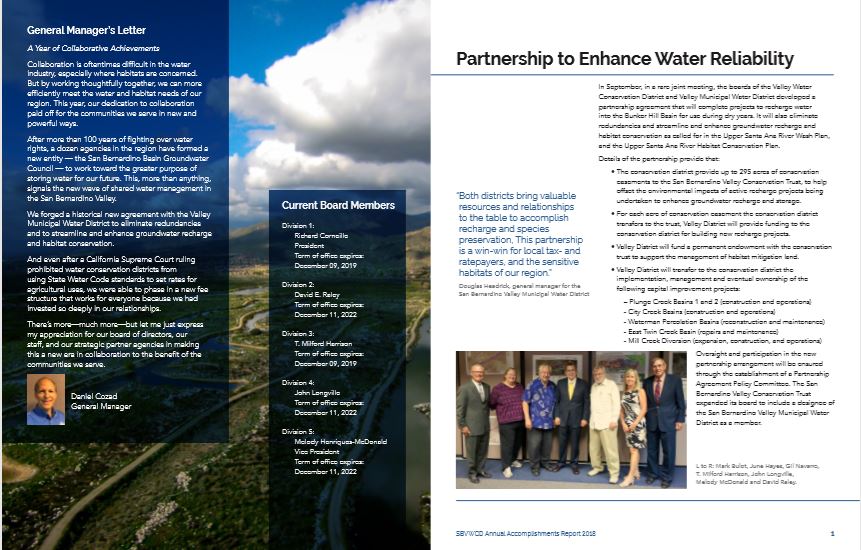 Collaboration is oftentimes difficult in the water industry, especially where habitats are concerned. But by working thoughtfully together, we can more efficiently meet the water and habitat needs of our region. This year, our dedication to collaboration paid off for the communities we serve in new and powerful ways. Find out how in our newly released 2018 Annual Report.

Manuel Colunga, field operations supervisor for the San Bernardino Valley Water Conservation District, was awarded this year's CalPERS Spotlight on Excellence Award —- an honor bestowed each year on one outstanding public servant in state of California.

The award was presented Oct. 22 at the California Public Employees’ Retirement System’s Education Forum in Indian Wells. A video, paying tribute to Colunga’s work and volunteerism in the community, was posted on the CalPERS website alongside past recipients of the award.

“The efforts of public servants often go unnoticed, even as they work diligently behind the scenes to educate us, protect us, keep us healthy, and provide essential services and infrastructure,” CalPERS stated on its website. “That’s why we created the CalPERS Spotlight on Excellence award.”

In his role at the District, Colunga keeps watch over the 18 miles of canals, 26 miles of roads and 73 recharge basins he patrols daily with his small team within the San Bernardino Valley Wash. As a steward of the land and the water, it’s his job to watch the skies, anticipate water flows, reshape contours of the earth and capture water — recharging it into the groundwater basin that serves the San Bernardino Valley region.

Colunga is also a committed member of the community. He has volunteered as a trainer for the Redlands YMCA Youth Circus for more than 18 years.

“Manuel is an exceptional person, and we are extremely lucky to have him on our team and helping out in our community,” said SBVWCD General Manager Daniel Cozad. “From the standpoint of doing what’s right and helping others, he clearly exemplifies the values and principles of public service in all his professional and personal interactions.”